I like going to expos. I know there are runners who really don’t like them, but I do. Mainly because I also like merchandise, always have. I used to buy sweaters from the universities I used to go to summer school, but now I buy marathon merchandise instead. To be fair, I only buy marathon gear, I don’t buy race shirts from others races (unless it’s included in the race). Otherwise I would just end up with too much running shirts.

Because of the jetlag I was up early and after hanging around some of the shopping streets of Manhattan, waiting for the phone store to open so I could get a tourist sim card, I headed to the Javits Convention Center. It would open at 10 am and I got there at 9.30 am. I sat on a bench outside for a bit (because the weather was great for November). After that I decided to head inside and there was a huge line already forming in the hall of the convention center. That line only grew bigger over time, but once the expo opened it spread out pretty quickly.

It wasn’t difficult to pick up the bib number and after that you get to pick up your shirt. If you’re not sure about the size you can try it on first to see if it’s the right size. After that it’s obviously time for the obligatory bib number photo, so there was a entire queue spontaneously forming for that.

After you’ve picked up the bib and shirt you first get to all the New Balance merchandise, because they’re the sponsor. Because I went early on the first day of the expo they still had everything in stock, so I had no trouble finding a marathon jacket, t-shirt, hat and gloves. Americans are good at merchandise and especially at the New York City Marathon, since it’s the biggest marathon in the world. They had a lot of great marathon gear, although some of it was also a bit silly. They even had marathon teddy bears.

After the New Balance stand you get to the rest of the expo. I first went by the World Marathon Majors stand (the 6 biggest marathons in the world, well not quite, but that’s how they’re regarded). Then picked up a pace band and headed for the Feetures stand. I noticed they had a limited edition sock for the NYC marathon and got a pair of those. 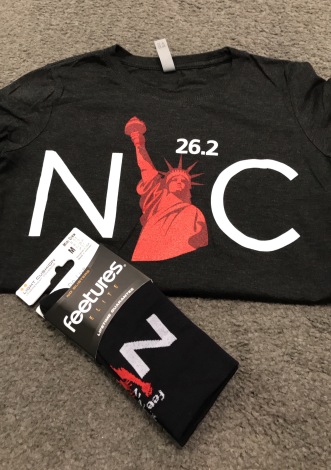 Every hour you could go and listen to a talk about race strategy. Since New York City Marathon isn’t an easy course that can be very useful. Although since I’d done some research on the marathon before I already knew most of it.

I wandered around a bit more on the expo. Looked at the limited edition Oofos they had, but I already own two pairs of Oofos, so decided not to buy those. There were lots and lots more stands and you could also go and find your name on a big wall. Most large marathons have such a wall, but it isn’t always easy to find your name on them. Luckily, this time they clearly marked where which letter of the last name started, so it wasn’t that difficult.

I really liked the expo, it’s huge, but after 3 hours of hanging out there I really needed to get outside and get away from the noise and the hustle and bustle of it all. They have a lot of products and lots of companies represented, but at the same time it’s all a bit much as well. Luckily the High Line (a park made on an old rail track) starts next to the convention center so I went there after the expo.