I’ve never done a 10 mile race before, it’s just not such a common race distance. There also aren’t that many races over here during winter. One of the bigger races in February is the Midwinter Marathon in Apeldoorn. They have an 8k, 10 mile and 25k race (and a trail marathon the day before).

The 25k race would have been a good training run for the Paris Marathon, but unfortunately there was no way I would be able to make that before the cut off time. But the 10 mile race had the same cut off time, so that would be easy to make. But the 10 mile race isn’t a huge race, around 3200 people take part. For me, the more people running the better, because there will be more people at the back, which is better than running by myself at the back and there is less of a chance that the organisation will give me a hard time about being at the back. I did look at the finish times from last year (like I always do before signing up to a race) and it seemed like there were some other slower runners out there. So I decided to give it a go.

I had to get up at 6 in the morning, since I had a 2 hour journey to Apeldoorn ahead of me. When I arrived in Apeldoorn the organisation had arranged busses to take us to the start. Near the start is a theater which we could use to change and leave our stuff. You could change on the stage! I was very happy with the fact that I could at least be inside for a while and I didn’t have to wait outside in the cold for an hour. Temperature was around freezing and the wind was even colder. I had brought several extra layers of running clothes in case I thought I needed them. In the end, I decided to wear all 4 layers and didn’t regret it!

I’m not a cold weather person, I get cold easily and I have trouble breathing while running in cold weather. So, my muscles didn’t really like waiting in the starting pen for about 20 minutes. Since it was so cold I had my doubts about how this race was going to go. This was my first 10 mile race and I had estimated that it would take me between 02:10 and 02:15 to run it.

The first kilometer of the race I had trouble breathing and I thought “see, this just isn’t going to be my race”. Until I looked at my watch after the first kilometer and it displayed a time below 7 min/km. Which explained the difficult breathing, I was going way too fast! So I slowed down a little. But I didn’t want to slow down too much, because I didn’t know how hard the rest of the race would be and I didn’t want to get the race organisation on my tail.

I kept looking behind me to see if there were still other people behind me, since I was afraid the race organisation would start giving me a hard time if I ended up being the last runner. I’ve had this happen in the past, they see me run-walking and decide (even when there is still more than enough time left) that it’s going to take me too long and either start hinting that I should stop or start asking lots of questions.

The first 5 kilometers I was able to stay below 8 min/km and I decided to see how long I could keep that up for. I know I can keep that up for at least 5 km, if not 10 if the weather is good, but I wasn’t sure I could keep that up in the cold. I managed to keep at least some runners behind me at all times (not that there’s anything wrong with being the last runner, I just don’t like being harassed by race organisers), but still I managed to get a van from the organisation right behind me and I thought “why is it always me?”. But after a while I noticed they weren’t asking any questions or suggesting to the slower runners they should just give up, they were just keeping an eye out for all the runners.

Meanwhile, I’m going up and down hill after hill. At the biggest hill they even put signs indicating how far you still had to go until the top of the hill. While I’m walking there’s a woman at the back asking me whether I have a run-walk  strategy or whether I have any pain anywhere. I tell her that’s sort of what I’m doing, but that it’s a long story. Sure, to be fair, it isn’t such a long story, because the short answer is: I’m a heart patient. But there still are many people who still don’t get why I can’t run any faster or why I’m walking half the time. Which is understandable, but I don’t feel like explaining all that to a stranger, while struggling for breath while trying to get up a hill. So, I mostly answer with something like “I’ll get there eventually” or “I’ll be fine, don’t worry about it”. Also people sometimes get confused when they see me walk, assuming I don’t have any energy left and one minute later I come running past them with ease, only to start walking again 2 minutes later.

The same happened around the halfway point when an older gentleman passed me and asked if I had used up all my energy at the beginning of the race. Only to be looking at me in surprise when I passed him by not much later. And every time he passed me again he would tap me on the shoulder and try to get me to run with him. Very nice of him, but not something I’m able to do.

I passed the 8km mark at 01:01, faster than both the 8km races I ran last year. Meanwhile I’m able to keep my pace under 8 min/km and enjoying the forest we are running though. There’s a thin layer of snow on the ground, but luckily not on the road and the sun is slowly coming out. When I manage to keep up the pace until km 15, I know I’m able to keep it up for another km. I finished in 02:02:54! Seven minutes faster than I had estimated. 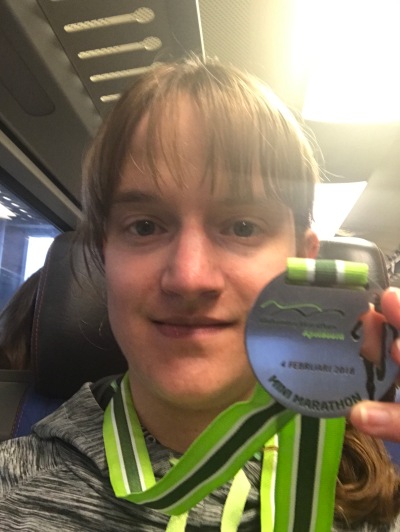 I would definitely consider running this race again! On hindsight, I could have also ran the 8k (which is in the afternoon). I could have easily made that, but then I would have had to wait for 2 hours while being cold due to some of my layers being wet. Not sure I would have enjoyed that. The race is very well organised and there isn’t anything that I would change. It’s great that there are busses to get you to the start (although it is a distance you can walk, it’s nice that you don’t have to stress about finding your way if you’ve never been there before), that you can change in the theater where it’s warm (and they even have free wifi) and that there are marshals everywhere and that the route is clearly marked (so you don’t accidentally run the 25k). 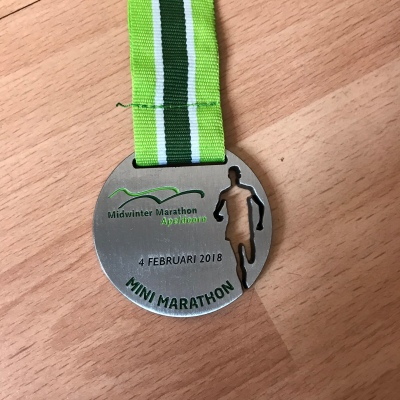