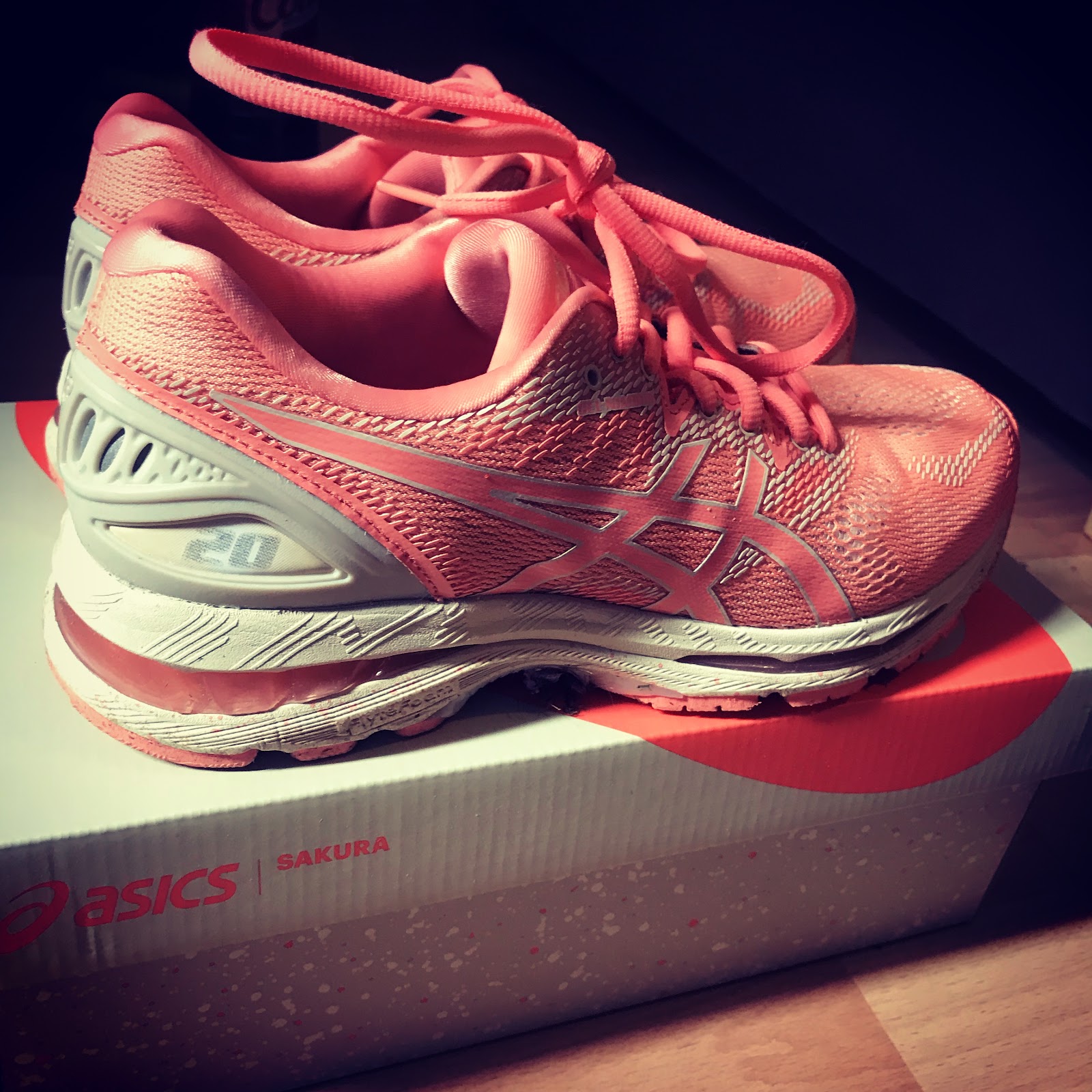 This shoe has been twenty years in the making. The Asics GEL-Nimbus 20 is a highly cushioned, neutral running road shoe. It has a forefoot height of 12 mm and a heel height of 25 mm for the ladies and 13 mm and 23 mm for the guys. That gives it a rather large drop, especially in the ladies shoe. It’s also a pretty heavy shoe.

The Asics GEL-Nimbus 20 has a seamless mesh upper with plastic overlays. It’s a double layered mesh, but the material isn’t very flexible, so it does restrict the space in the toe box a little bit. The toe box is wide enough, but not super roomy. The toe box also isn’t very high and is too tapered, thus creating a hotspot near on top of my big toe during longer runs. The upper isn’t super breathable, but it’s breathable enough.

It has a snug heel clutching system made of plastic that keeps your heel nicely locked in and the tongue and collar of the shoe a nicely padded to avoid any hotspots in those areas.

I did find this extra padding really comfortable. However, part of the lining of the shoe already ripped after 50 km in the shoes. Something I didn’t expect from such a high end brand as Asics.

Asics uses a gel to absorb the shock while running. Besides using gel in the midsole, Asics also uses FlyteFoam which is lighter than standard EVA foam. The heel provides a nice cushion, but the forefoot is a lot less plush. The Asics GEL-Nimbus 20 is quite a firm ride.

The outsole is made of the Asics High Abrasion Rubber. The rubber proved to be quite durable, after 50 miles of running in the shoes I didn’t see any signs of wear. The sole has a flat shape instead of a rocker shape, I therefore find that I have to use more energy to toe off than I would with a shoe that does have a rocker shape. I also find it a bit of a strange feeling when hitting the ground, my foot transition just didn’t feel normal. It sort of stops your momentum for a bit, until you toe off again.

Once in a while I also had small sharp objects getting stuck in the Flytefoam parts of the outsole, which I would need to remove during my run.

Overall, I found the shoe comfortable a reasonably stable for a neutral running shoe, but even though it absorbs the shocks very well, the shoe doesn’t feel very plush. It’s a firm and a bit of a heavy ride. The weight of a shoe doesn’t bother me very often, but in this case it did become a bit of an issue. I did find that my shins started to hurt slightly while running in the Asics GEL-Nimbus 20 and for quite some time I wondered why, since I did not have this experience with other shoes. Only reason I can think of would the lack of a rocker shape, which makes it harder to toe off.

I ran in my regular size, but found that I didn’t have as much space in the front of the shoe as I would have liked. I probably would have been better off with half a size larger.

Although the Asics GEL-Nimbus 20 performs well when it comes to shock absorption and it’s a nice looking shoe, it isn’t a very fast shoe. The lack of rocker shaped outsole and the weight of the shoe prefend the Asics GEL-Nimbus 20 from becoming a fast ride. It is more of a comfortable long distance training shoe than a quick race shoe.