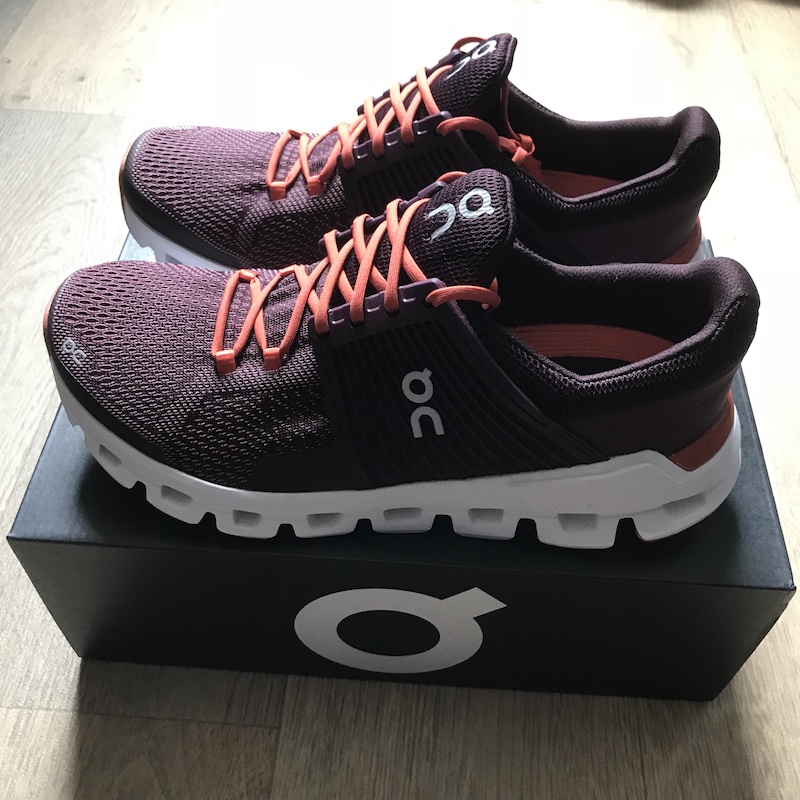 I’ve never ran in a shoe by On Running before, I had never even tried on a pair of their shoes before. But I did see a lot of runners, and hikers, in their shoes and I got curious (like always). I wasn’t sure which On Running model would be the best fit for me, but when they launched the new On Cloudswift and said that it had a new kind of super foam and offered road protection, I had to try it.

The On Cloudswift is a neutral everyday running shoe, with a 7 mm drop. It is quite a light shoe and comes in around 240 grams. On doesn’t provide any information on the stack height and it’s always a bit difficult to measure, because where exactly do you measure and what is included in the sole and what are just additions that do not influence the stack height? But I’m estimating that it has a forefoot stack height of 22 mm and a heel height of 29 mm.

My first thought when I opened the box was: “I now understand why On Running shoes are so expensive”. Everything about it looks fancy. Even your receipt comes in a fancy envelope, instead of them just chucking it in the box. And I also got a free bag with my order. The shoes look well thought through and even the insole looks fancy with its two different materials.

And as if that isn’t enough, they’ve printed “Put me ON” on the end of the laces. Although, I’m not entirely sure why I was that surprised about the quality, it’s Swiss engineering after all. Which they’ve printed on the heel counter together with a Swiss flag, just to remind you. But the surprises didn’t end there.

The upper of this shoe is made up out of one piece of engineered mesh. I’m not a huge fan of one piece uppers, although they are often quite comfortable, they are harder to adjust to the shape of your foot due to being one single piece. That means there mostly isn’t a way to really adjust the laces and change the fit.

The laces are also really thin and do come undone easily while running. But it won’t be easy to swap the laces, because of the loops at the front which aren’t that wide. There also isn’t an extra eyelet to put the laces through.

To give the shoe a bit more stability it has two bands running over the midfoot made from stretchy thermoplastic polyurethane. Sometimes overlays just create hotspots, but since these are stretchy they are actually quite comfortable.

There is an internal heel counter as well as an external band running along the top of the heel cup.

On Running is known for its innovative midsoles. Like all the shoes made by On, the Cloudswift has the Cloudtec midsole with the cloud pods. What is different about the Cloudswift compared to the other On running shoes is that it has Helion super foam to provide more cushioning.

The Cloudswift has a rocker shape and before I tried this shoe, I assumed all rocker shapes were the same. But apparently, I was wrong. I’m a fan of rocker shapes, it makes it easier to make that heel to toe transition. And I’m a fan of the rocker shape in the Skechers GoTrail Ultra 4, but somehow the rocker shape on the On Cloudswift isn’t the same. It is not as easy to toe-off in and it seems to me like it just makes me roll back onto my heel while I’m trying to toe-off. I don’t know if that is because of the difference in drop or because the On midsole is firmer, or because the curve is different.

The outsole of the On Cloudswift is partially made out of rubber. The pods on the front of the shoe are covered with rubber and some of the pods in the heel are as well. The pods underneath the midfoot don’t have any rubber on them. However, the shoe doesn’t have great traction on wet surfaces, despite the rubber being there.

The words “superior cushioning” are words that make me happy. I like cushioning, and a lot of it. So, imagine my surprise when I put on the Cloudswift and the words “superior cushioning” didn’t come to mind at all. On Running has the slogan: Running on clouds. I personally imagined a soft and plush feel, because that’s what I imagined running on clouds would feel like. But I got everything except that. The ride was way firmer than I had expected. But I assumed they just needed some breaking in. But after 50 miles in this shoe, the firmness doesn’t seem to have changed.

The ride on the road was too firm for me, so I switched to easy trail. That was more comfortable, but I managed to pick up several small pine cones in the first two minutes on the trail. And even on the road I managed to easily pick up some small rocks and twigs. This is a well known problem with the On Running shoes, but is also something they claim they’ve fixed by changing the curve of the flex grooves on the outsole.

I really like the look of this shoe and I also like the colorway, which isn’t a color you see very often in running shoes. But the marketing of this shoe didn’t seem to match the experience I had in them. It was a much firmer ride than I had expected and didn’t protect as well against the hard landing on road surfaces as I had imagined. There is nothing significantly wrong with this shoe, it is well thought out and comfortable, but I might be using this as a hiking shoe from now on rather than a road running shoe.

One thought on “On Cloudswift – Definitely surprising, but in a good or a bad way?”