I used to say to people: “I’m a heart patient, but I can basically do anything, except run a marathon”. And friends and family would shrug, that wasn’t so bad, there are tons of people out there who don’t. So if that was the worst implication of my cardiovascular impairment, no worries.

I started running 3.5 years ago. Thinking that if I just took my time with the couch to 5k, I’d eventually get there. Well, I did eventually go the distance, but not running it the full way. And along the way I learned that I probably never would. My running still consist of about 400 metres of running and then walking for roughly the same distance and then run again. My heart rate simply just gets too high and I have to walk. But after doing 3 half marathons, I decided it was time to try to run a marathon. Even though I had no idea if that was possible or not. Half marathons are doable for me, but it’s not like they’re easy. And due to my high heart rate it also takes me more energy to run, than someone with an average heart rate.

I didn’t enter the ballot for Berlin, because I thought I wouldn’t have time that weekend. Eventually my plans changed and it turned out I did have time. So I went on a hunt for a bib and eventually booked through a tour operator. There was no way back, I was at least going to try to see if I could run a marathon, because there was only one way to find out. I decided that even if I got caught by the sweeper bus at somewhere around 30k, so what, I would have had fun running through Berlin and at least I would have tried.

Before setting off to Berlin I had some check ups to see if it would be ok for me to run. The doctors didn’t see any reason why not. Although it did turn out that my VO2max had gone down (again) and was only 38 (when I started running it was 45), even though I obviously had trained pretty hard for the marathon. I still have no idea what’s causing that (if anyone has any suggestions, please let me know). But it did mess with me a bit mentally. How was I going to run a marathon with a VO2max of only 38?! But I had trained for it and everything was booked, so I might just as well try. I didn’t really care how long it would take me, I’d be happy to finish. If I could run below 6:15 (the Berlin Marathon time limit) or maybe even below 6:00 (if that was even possible at all) that would be a bonus.

I arrived on Friday and went straight to the expo from the airport. Didn’t take long to get in and get my bib number and chip. The rest of the expo was less organised however. There were 3 halls and it was busy. At least half the merchandise had already sold out. You were able to get a keychain at the BMW stand with the route, your name and bib number on it, but the waiting time was over 2 hours! (Dear BMW, if you know this many people are going to show up at the expo and you offer this, you should have more people working on this!) I waited around for 1.5 hours and then decided to go to my hotel. I went back the next day to pick up the keychain.

I had to get up at 5, since the bus was leaving at 6.45 because our hotel was so far out of the city center. We arrived at 7.30 and it was still raining. I made it into the bag drop area by 8 and sat down for a while trying to eat something. Dropped of my bag and got in line for the toilets. The line was moving very slow however. I thought about going to find other toilets, but realised I would have to get in the back of the line there and might not be able to go before the start if I did that. So I decided to stay put, but this meant that by the time I got into the pen I was near the back. I had hoped to be more towards the front, so I had more of a head start on the sweeper bus.

It was raining and this made me cool down pretty fast while waiting in the pen. I was wearing an old sweater I was going to chuck at the start, but I decided to wear it a little longer until I got warm. I crossed the starting line at 10:10 AM. Because I was cold I wasn’t running too smoothly and within 5 minutes I could hear the organisation counting down the last runners crossing the starting line and I realised the sweeper bus wasn’t that far behind me as I would have wanted. I thought it might catch me at the 5k point, how was I going to explain that to everyone?!

A German woman saw me walking and asked me if I wanted to run together. I told her no thanks. It was a nice offer, but it’s sometimes difficult to explain to people that I have to run-walk-run. I knew my parents would be around the 4k mark, so I was on the look out for them, but I was still a bit anxious about the sweeper bus.

After seeing my parents I decided to play a game called “Let’s find Carl”. I knew Carl (@BigCarlRunning) was ahead of me. I thought for about 10 minutes and his average pace is a little slower than mine, so I calculated that I was bound to catch up with him around the 10k mark. Running still wasn’t going that smooth, probably due to the early morning and the rain making it a bit cold. Definitely not the best 10k I ran, but at least I didn’t end up starting too fast. I reached the 10k mark at 1:22, but at that point I felt like I had already run a half. This was a little worrying, because there were still 32k to go!

I started to feel a bit better after the 10k point. People were commenting on my t-shirt (which has “Slow runners make fast runners look good, you’re welcome” on the back) and an American who passed me showed me his, which said “It doesn’t matter how slow you go, just give it a go”. Also a good one! In the meantime I was still looking for Carl and my parents, because they would have taken the underground and would be somewhere further along the course, but I wasn’t sure where. I saw them again around the 15k mark.

I was still doing fine at this point. Enjoying running through Berlin, although there weren’t that many supporters out there. Probably because of the rain. I really enjoyed the part around the 20k mark where you go underneath several bridges and the rain was dripping off them and the birds were making noises which echoed of the metal bridges. But to my surprise, I still hadn’t seen Carl and I was wondering how fast he was going.

Crossed the halfway point at 2:56. Slowest half yet, but at least under 3 hours. Still going strong, physically as wel as mentally, which I was happy about, because normally I start struggling towards the end of a half. So every km I could add to that without trouble was a win. At the 22k mark I finally spotted Carl! Turns out the started further ahead of me than I thought and that’s why it took me so long to catch up. Walked together with him for about a km and then headed off on my own pace again. Saw my parents at 24k again.

At 26k my left calf started to play up a little. The lactate was building up. But mentally I was still fine. Before the race I had thought that the marathon might me tougher mentally than physically, but so far I was fine mentally. Physically it became a little harder though. I crossed the 30 km mark at 4:13 and realised I still had 2 hours to complete the remaining 12 km. I realised I was going to make it. Even if I walked a little more due to my legs, I would still make it within the 6:15 time limit. Most likely not within 6 hours, but who cared.

It became more and more difficult to run. In this case my run-walk-run was working against me (not that I really have a choice), since starting the run again proved difficult since your stiff muscles need to take the pounding and they don’t really appreciate that. I saw my parents again at 32k and they walked with me for about 2k.

My times were getting slower, but I didn’t really care anymore. I just wanted to complete it and didn’t care about time that much anymore. My muscles were just too stiff to really do any running any longer. But looking at the runners around me, I wasn’t in such bad shape. I could walk just fine, only the pounding during the running that was the issue. I saw other runners who could barely pick up their feet and probably would need to buy new running shoes the next day for dragging them over the road surface! I also still had a little energy left, something that I normally struggle with a lot. And mentally I never wobbled either. I never thought “never again” or “why am I doing this”. So all in all I was pleasantly surprised. Sure, time wise it wasn’t a miracle, but so what? I was about to complete my first marathon!

There was more support here and I tried to pick up the pace a little. Not sure how I managed, but I did run a little more towards the finish line. Probably all the people cheering helped quite a bit. It wasn’t a sprint finish, but I did make it across that finish line! I’d managed to complete the Berlin Marathon in 6:15:19! Yes, that’s 19 seconds over the time limit, but technically the time limit started after the last runner, so the sweeper bus never caught up with me. Apart from those first few kilometers where I could see the bus way behind me, I never actually saw it again.

I got my medal. Didn’t get a bag with food/recovery stuff though. Hope I didn’t miss anything really good. I picked up my bag and returned my chip (why on earth did they make a chip where you have to untie your laces?!). And met up with my parents. Unfortunately, we still needed to take two S-bahn lines to get back to the hotel. And unfortunately these stations have lots of stairs! Not too happy about that, but I managed! All in all, it went way better mentally than I expected. Energy wise it also went fine. It was just the lactate in my legs that slowed me down at the end. Yes, it was tough, but not as bad as I had expected.

I had sore legs for two days and I’m still quite tired, but other than that recovery is going quite well. Really loved running the Berlin Marathon. Haven’t regretted it for a second and I’m already contemplating my next marathon.

So it turns out I’m a heart patient, marathon runner and I can do anything! 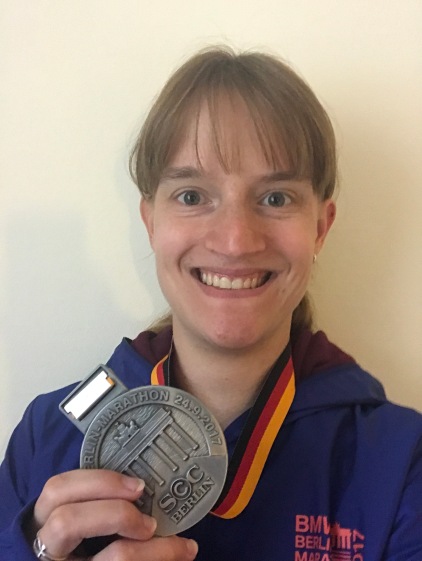 5 thoughts on “Berlin Marathon 2017: against all odds”