There is one thing the Berlin Marathon has taught me: that against all odds I’m able to run a marathon. Something that I deemed impossible just a few years ago. Thus, I’ve learned that the impossible can be made possible. To the surprise of one of my doctors. She can’t even believe I run half marathons, let alone marathons.

So, I decided to sign up for the next marathon. Since I didn’t get through the ballot of the London Marathon (again), I decided on another big marathon: Paris. Only there is one difference between the Paris Marathon and the other big marathons, you need a signed medical certificate. You don’t need any specific tests, just a form that says your doctor is ok with you running the marathon. Because they think this will bring down the number of sudden deaths during sporting events. Research has already shown this doesn’t help to bring down this number, yet they still insist.

For the average runner this won’t be an issue, but for me it was a little more difficult. I tried several doctors who didn’t want to sign. Not because they were completely against me running, but because they didn’t want the responsibility to be theirs if something were to happen after all. (Just to be clear, I get a sports check up every year and I see a cardiologist and currently also a sports cardiologist. Besides a high heart rate I have no issues while running and if I would ever think something would be wrong, I’d stop running. But currently, nothing has changed since I started running. Tests show everything is stable.)

For a while I was worried I wouldn’t be able to find someone to sign the form. But in the end I did manage to convince a doctor to sign it by saying that I’ve already ran a marathon and so far everything is still fine. So I’ve managed to jump over that hurdle and am now able to go and run the Paris Marathon! Well…except for the training part. 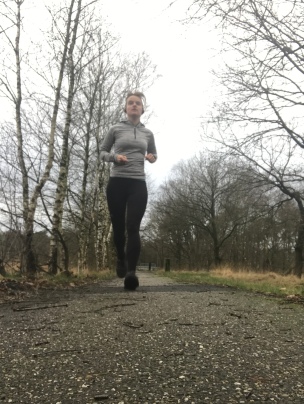 It’s already pretty impossible to find people to go run with, since I can’t adjust my pace, they have to adjust theirs and that’s a bit of an inconvenience to basically every runner who’s been running for more than a month. I can sometimes find someone to run with for a 5 or 10k run, but that’s it. I can’t ask someone to go running with me for 4 or 5 hours. Hence why I’m dreading marathon training.

The other issue is the cold. Me and cold weather don’t really get along very well. I get cold easily and have trouble breathing while running when it’s cold out. So even if training for a marathon is a bit difficult, it’s even more difficult during winter.

And I’m also not really sure how much or little I should train. Running is more of a strain on my body than it is for the average runner, simply because the average runner has a heart rate of around 150 while running, while mine is more like 200. This means that one km of running for me is about the same a one mile of running for the average runner. Thus, it takes me longer to run a certain distance, but it also takes me longer to recover. Therefore regular training plans don’t work for me. And even though I know I can finish a marathon, I’m still unsure as to how much faster I can go and how hard I should train for that. Obviously I don’t think it’s possible for me to run a 5 hour marathon, but I’m not sure if sub 6 would be possible with the right kind of training. Or what the right kind of training looks like.

So, currently I’m trying to roughly stick to the training I did for Berlin, since that was apparently sufficient. But I am trying to make more training kilometers. Because the first 3 months of marathon training for Berlin I was very busy and didn’t get much runs in and I tried to make up for that in the other 3 months leading up to the race (within reason of course). But that was over the summer and it’s always easy to run more during the summer months.

I’m trying to hit a certain number of minimum training kilometers a week to make sure I spread it more evenly this time. But I don’t always manage to hit that number. I’ll just have to see how the next three months go. To be continued…

I’ve had a couple of crazy weeks at work, but all deadlines were made. So I really needed to go clear my head with a long run. I finished the #beyondbelief challenge by running for 1:59:40
Short run today in memory of Ahmaud Arbery, who was shot while out on a run a year ago.
From winter to summer in a week. Still busy with work this weekend, since I have several deadlines next week, but had to get out for a run and enjoy the weather.
Rainy 5k run today trying out my @newbalancerunning 1080v11.