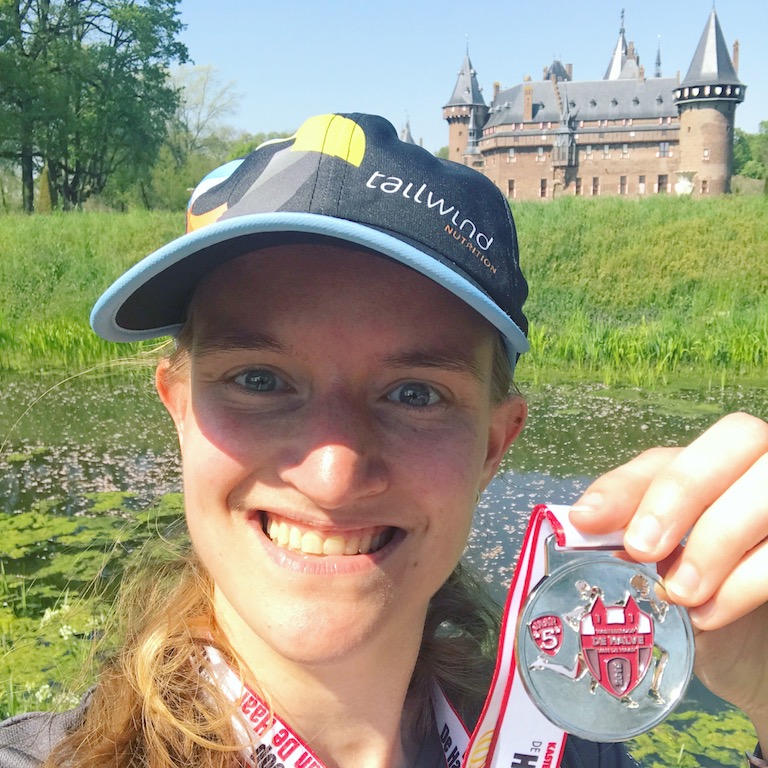 This was the fifth time this event was being held and I had heard a lot of people say it was a great race, so I decided to sign up for the 10k and check it out myself. The race was on Easter Monday and it would turn out to be a hot day.

Kasteel de Haar is a medieval castle and the race starts and ends on the grounds of the castle. I thought the race village would be next to the castle (at least that’s what it looked like on the map), but I had to walk for about a kilometer to get to the race village. Once I got there it was easy to pick up my bib and drop off my bag. The race village wasn’t that big and the line for the toilets became very long. So long even that they decided to postpone the start of the 10k by 10 minutes so people had time to get into the corral.

The first kilometer you go through the small village located next to the castle. I was still able to keep up with the other runners, but at kilometer 2 I started to realise my heart rate wouldn’t really go back down again and that I struggled a little with keeping up. At this point in the course you loop around a lake, where it was very busy, since it was 26 degrees celsius and sunny out and everyone wanted to hang out at the lake.

After the lake you pass through the next town. At kilometer 4 the kilometer signs became a bit confusing, because there weren’t only signs for the 10k, the half marathon also passed by and also had signs and those were 300 meters apart every time. So when you thought you’d gotten to kilometer 4, you actually had another 300 meters to go to get to the actual 4 kilometer point. At this point I was running at the back with just a few other runners and we sometimes couldn’t see the runners in front of us. When we got to a roundabout we had to guess which way to go, I thought I had seen the other runners go left and luckily that turned out the be the right guess. 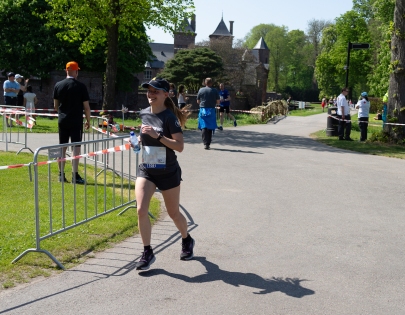 From kilometer 6 onwards you were running in between fields again and I was starting to slow down even more, because I could just feel my body radiating heat. I struggled on for a few more kilometers and at kilometer 8 I got passed by the first half marathon runners. At this point the signs got even more frustrating, because the 5k signs were also thrown into the mix. After that you make your way back onto the grounds of the castle. At this point I could see other half marathon runners around me, but no other 10k runners. On the grounds there were signs for first and second loop of the half marathon, but it didn’t mention anything about the 10k, so I started to worry I might have taken a wrong turn and ended up at the half marathon course. Luckily, at the point were the two courses did actually split there were marshals to tell me where to go.

I finished in 1:20:58. That’s not a great time, but it was simply just too hot and I noticed that even while walking my heart rate wouldn’t drop below 200. When it’s hot your heart rate goes up, which means your heart rate while exercising in hot weather is also higher. Mine was about 20-30 beats higher than if it would have been colder outside.

I did really enjoy the course though. It was nice to run around the lake, through several villages and through the gardens of the castle. Overall, the organisation was pretty good, but it would have been better if they’d also had an aid station at around 2.5 kilometers. They did have one at 5k and 7.5k and they had sponges at the finish, but it would have been nice to have those sooner, while you’re actually exercising, not when you’re already cooling down. Luckily some nice people in the village were handing out water and trying to cool runners down with a water hose. Also, the signage could have been a bit clearer and some more toilets might have been nice. But, would I run this race again? Absolutely! However, I hope next time it will be a bit cooler.

Enjoyed my trail run today.
I’ve had a couple of crazy weeks at work, but all deadlines were made. So I really needed to go clear my head with a long run. I finished the #beyondbelief challenge by running for 1:59:40
Short run today in memory of Ahmaud Arbery, who was shot while out on a run a year ago.
From winter to summer in a week. Still busy with work this weekend, since I have several deadlines next week, but had to get out for a run and enjoy the weather.