There aren’t many hills in The Netherlands, they are mostly located in the east and south of the country. Around Nijmegen there are several hills and they even have a running event which conquers seven of those hills, hence why it’s called the seven hill run.

I ran it last year as well, two weeks after finishing the New York City Marathon. Since it’s quite a large event, 20.000 runners for a 15 km race, you are bound to run into some familiar faces. So, some nice autumn weather, some nice views and some friendly faces make for a great Sunday.

It already started on the train on my way tot Nijmegen where I ran into Bianca and on my way to the expo I ran into Willie. At the expo I met up with Marjon, because she wanted to try the Aftershokz Aeropex. After that I went to drop off my bag. Since there are so many runners there are several parking garages near the start where you can change and drop off your bag. I also met up with Sander before the race and let him borrow a pair of Aeropex for the race. He wanted to see if it would work well with his hearing loss.

There are nine different starting waves and instead of being lined up one starting wave after the other they are actually spread out over several streets around the starting area. Once your wave gets going you will be directed to the same start line of course. 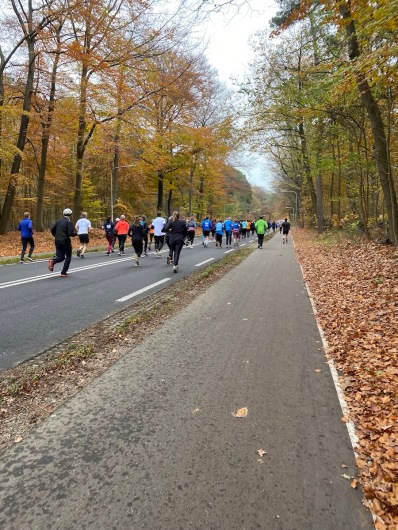 It is pretty busy on the course but in the beginning the road is quite wide and I often just ran on the cycling path next to it if there were no cyclists. After the 5k mark there is a part of the course that is a bit narrower for about 2 kilometers, but after that the road gets wider again.

This is also the point where one woman felt compelled to tell me I should run slower, because she had already passed me three times during the race. Yes, I know, now move on, because you know nothing about me. A bit later another arm grabber passed me and tried to drag me along. I just let out an annoyed sigh at that point. I’ve said this before, and I’ll say it again: don’t just grab someones arm and drag them along with you. It just isn’t funny. Luckily there we also some positive encounters, several people telling me they really, really liked my shirt and one woman telling me I should at least get first price for best shirt. Well, at least that’s something.

They are quite adventurous at this race, so the organisation tries something new once in a while. Last year that was the smart medal, which I couldn’t really get to work, so I wasn’t really impressed with. This year the medal was made out of wood. I didn’t really mind and the design was kind of fun, but I saw very long lines for the medal engraving tent, so not sure they will do that again.

Another thing they were experimenting with this year were the Ooho balls filled with sports drink. Ooho balls are little balls made of an algae membrane filled with liquid. You can eat the balls and they are biodegradable. This in order to reduce waste at sports events. But, as I predicted, there were no Ooho balls left by the time I passed the aid station, so unfortunately for me I didn’t get to try them, but I totally support the idea.

As usual these days my energy levels had its ups and downs and that didn’t always work great together with the hills. That didn’t result in a very fast time, but I did enjoy the run and in the end I did finish 15k. Last year when I wasn’t on medication I ran the race in 01:54:50 and this year with the heart medication I finished in 01:58:07.

Would I do this race again? Yes, it’s a well organised event, which has a good atmosphere and some nice views on the hills.