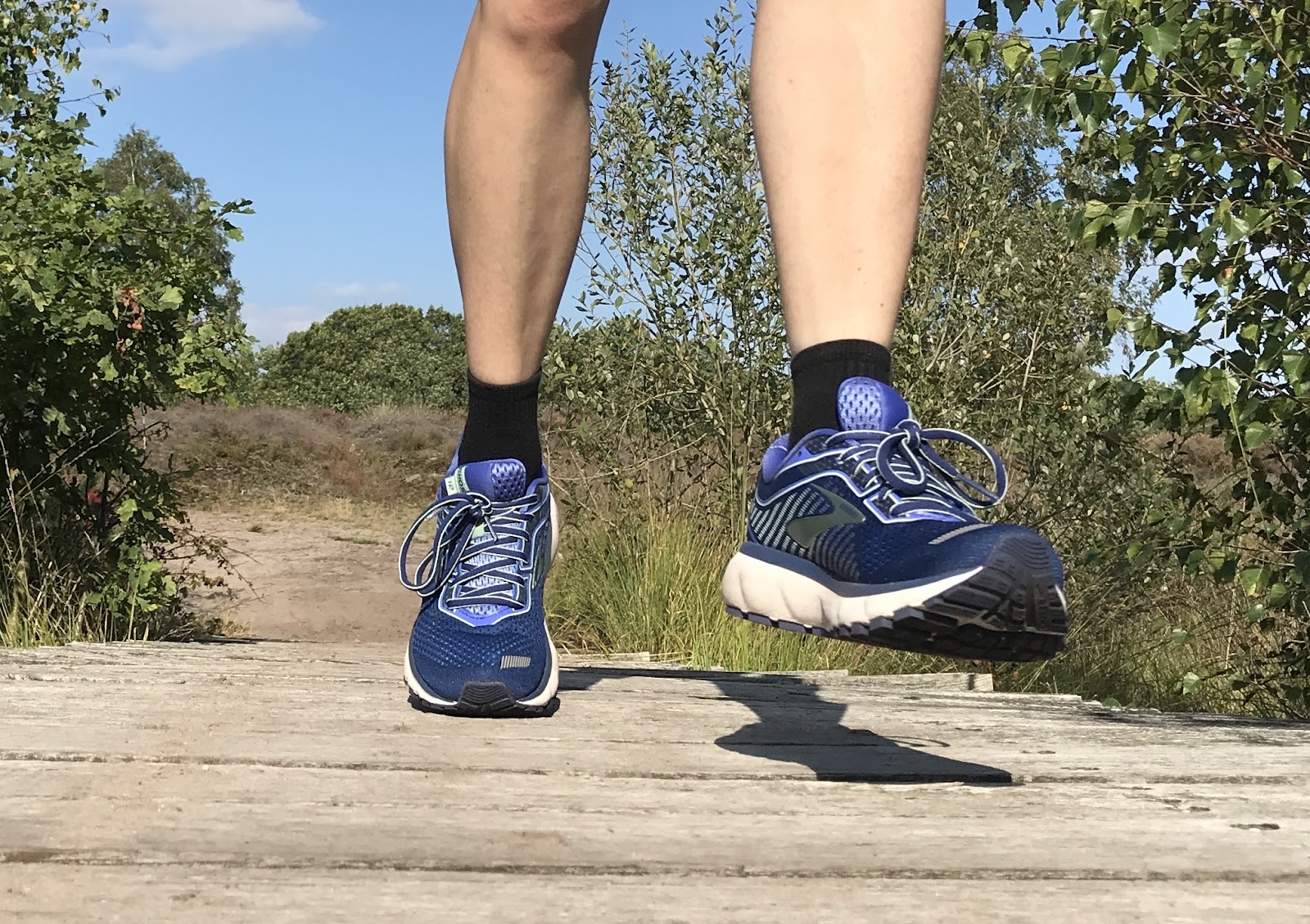 My first running shoes from Brooks were the Levitate 2 and I was very impressed by that shoe and its midsole material, which made me wonder. Because I know so many runners that are so happy with their Brooks running shoes, why is that. When I put the Ghost 12 on they were comfortable right out of the box and I thought to myself “I think I’m starting to understand why people love Brooks”.

The Ghost is their most popular shoe. It’s a neutral road running shoe which has a 19 mm forefoot stack and 31 mm in the heel, giving it a 12 mm drop.

The upper is made from an engineered mesh. It’s a pretty simple and quite a sleek look, which I actually like. There are some simple overlays on the lateral and medial side, but nothing too obvious or weird looking.

It has a wide and roomy toe box. And the upper has a bit of stretch to it so if will form to your foot, but at the same time I had no issues with locking my foot down correctly in this shoe. In that sense I find this shoe quite effortless. It was comfortable straight out of the box and I didn’t need to do a lot of adjustments to get the right fit. It has a detached tongue, but it does have an extra loop on the tongue to put the laces through to hold the tongue in place.

The fabric of the heel collar spills over onto the outer layer of the upper. There are two seams, one on either side of this fabric. This seems to be mainly for esthetic reasons, since the lining of the Glycerin 17 didn’t have any seams and the middle piece of fabric on the Ghost 12 has a different color than the rest of the collar. Although it didn’t create any hotspots for me, I think it would have been better if Brooks made the collar of the Ghost out of one piece like in the Glycerin 17, just to make sure it would not create a hotspot.

The Ghost 12 has a dual material midsole. Part of the heel and the lateral side of the midsole are made with Brooks DNA LOFT material which is a blend of EVA foam with rubber and air. This is the same midsole material as they use in the Glycerin, while the faster Brooks shoes like the Levitate use DNA AMP material.

The rest of the midsole of the Ghost is made up out of BioMoGo DNA which is a bit more of a responsive material. I had to get used to the dual material midsole in the beginning and personally, I probably would have made the DNA LOFT part a bit bigger and have extended it further on the medial side of the heel to get a smoother heel to toe transition, but I did get used to  the dual density after a while.

The outsole of the Ghost 12 is made from blown rubber and pretty durable. After about 50 miles in the shoe there is still hardly any wear on the outsole.

The flex grooves together with the upper help to maintain a pretty good flexibility in this shoe.

The Ghost 12 has a bit of a wider platform than for example the Glycerin 17, which gives you a bit more stability while still maintaining that neutral running shoe feeling. The dual density midsole makes for a quite snappy ride, while still providing some cushioning in the heel. It does give you enough cushion for those medium runs but is also snappy enough for some faster runs.

Whether you can use the Ghost 12 as a long distance running shoe depends on your own preferences, for me this shoe is a bit too firm. It’s not a max cushioned shoe which is what I prefer for longer runs. But if you like a bit firmer and a bit more responsive ride you could use the Ghost 12 for longer runs as well as some shorter and a bit faster runs. It is a versatile shoe when it comes to the fit and ride of this shoe.

I can see why so many runners like the Ghost series. It’s a very versatile shoe with a wide platform that gives you a stable base. It’s pretty simple yet pretty elegant in design and has a roomy toe box, while still nicely locking in your heel with some nice padding which prevents hotspots.