OOfos makes recovery footwear. I’ve been using their sandals for a couple of years now and I think they’re great. Especially after very long runs, but I also just wear them in the summer instead of regular flip-flops, because they have good arch support. However, I live in a country where it isn’t always warm enough to wear sandals, so I also wanted to try the shoe version, the OOmg low. 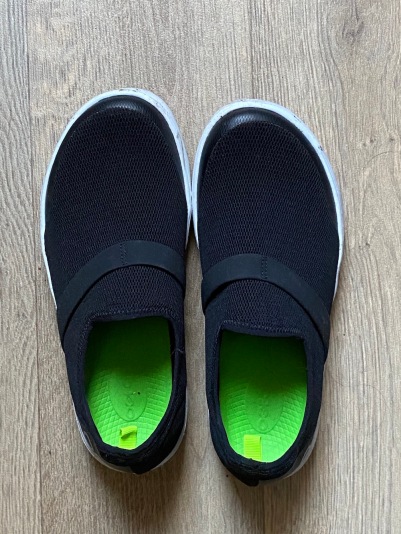 The OOmg shoes have the same footbed as the sandals and thus the same arch support. The footbed reduces the energy exertion in the ankles by 20%. The midsole is made of OOfoam which absorbs 37% more impact than the EVA foam that is mostly used in running shoes. And the shoes have a 6 mm heel to toe drop.

The shoes have a mesh one piece upper. There is a band that runs along the top of the midfoot to give some added support, but there is not a lot of structure to the upper and you cannot adjust the fit since there are no laces. Since it’s mesh they aren’t great in rainy or wet conditions when it is cold outside. Although the OOfoam itself is water-resistant and which makes them easy to clean. The sandals are just OOfoam and if I want to clean those I just wear them in the shower. I could do the same with the OOmg shoes to clean them, but if you want to keep your feet dry while outside, the OOmg are not the best option.

They are very light and this makes OOfos ideal to take with you to a race so you can wear them afterwards or to wear them after a long training run. I’ve often put them in my suitcase or bag so I could wear them after a (half) marathon. The sandals I put on after a marathon when I hop into the shower to relieve my feet and I wear the sandals or the shoes afterwards to take some pressure off my feet and muscles. They also claim they help you recover faster, but there are so many variables to recovery that that’s a bit difficult to prove. But they are definitely comfortable.

There are also people who say it has helped them with their plantar fasciitis. I’ve never had the issue myself, but I know people who have who found the OOfos helpful and had less pain while wearing them. But of course everyone is different.

The OOmg are very comfortable shoes, but I have problems with the fit. The shoe only comes in whole sizes. From the sandals I have size 38, but since they are sandals the fit isn’t much of an issue. I figured that I needed to go a size up on the OOmg, since they are shoes, but even that was a little tight, so I had to go another size up, rather than the half size I actually needed. And since I can’t tighten the upper they are a bit too big for me and they feel like I’m going to slip out of them while walking in them. I have to wear very thick socks in them and even then the fit isn’t great. Which is really a shame, because I really like the OOfoam. Ideally, I would like to see OOfos make a shoe where the upper is more of a trainer that can be laced and has a bit more structure and might keep some rain out, together with the same comfortable midsole as the OOmg and sandals.

The shoes were given to me by OOfos for this review, however, they did not have a say in the content of this review, all opinions are my own. The two pairs of OOfos sandals that I own I have purchased myself.