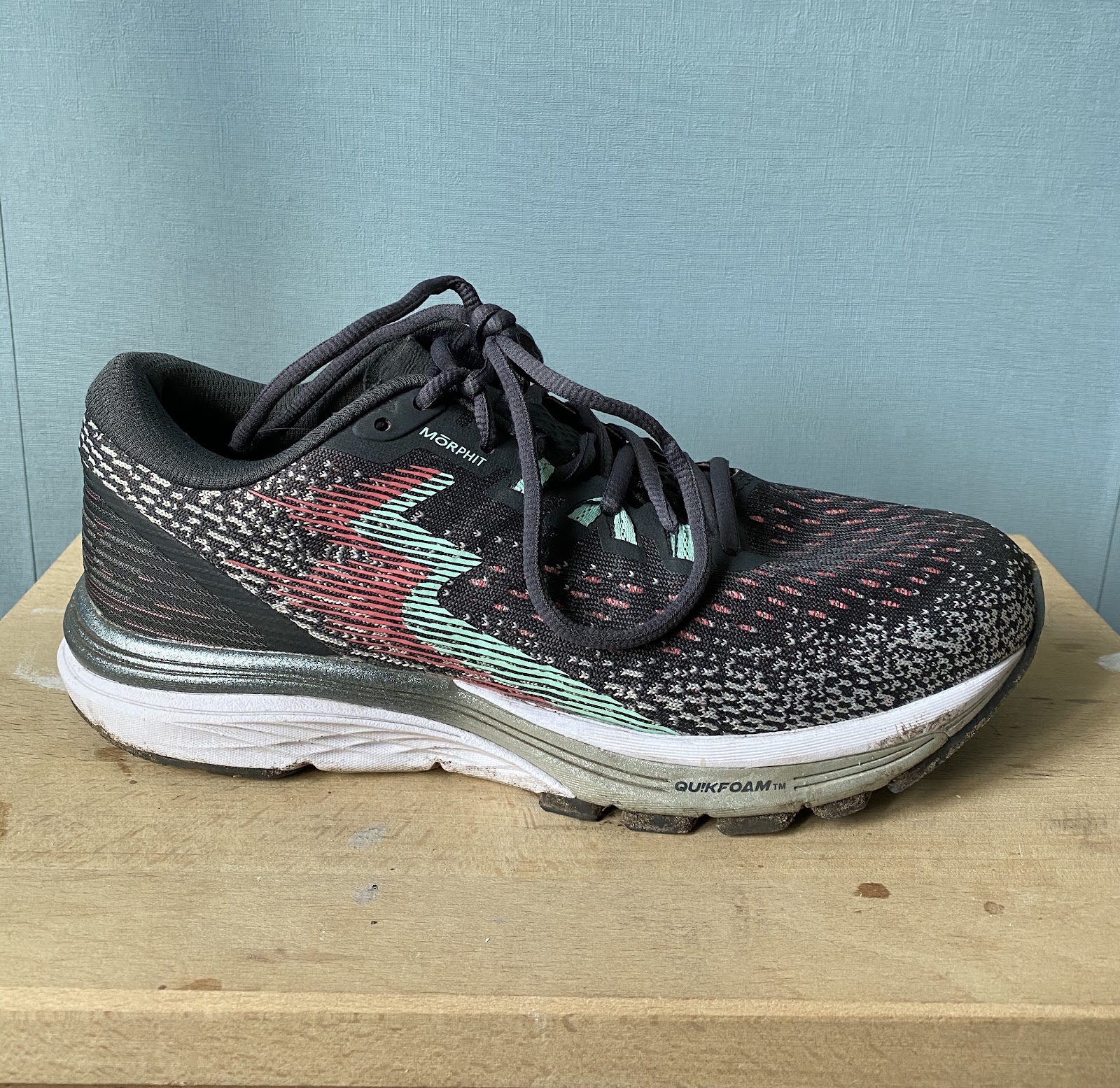 I’ve been looking forward to testing this shoe. This definitely isn’t the first shoe by 361 Degrees that I’ve tested and I actually tested the previous model, the Spire 3 last year and I really like that shoe. I was pleasantly surprised by its comfort, so when I learned that the goal for the Spire 4 was to deliver more comfort, ultimate comfort, I had to try it. I’m on the everlasting hunt for the perfect marathon shoe (which marathon runner isn’t?) and I had classified the Spire 3 as a possible marathon shoe, so would the Spire 4 actually become my marathon shoe?

There is more padding in the heel compared to the previous version, which I don’t mind since I like a good lockdown of my heel. I like the reflective details on the back that actually spell out Spire. It’s a nice little detail.

The Spire 4 now has the Morphit lacing system, just like the Meraki 3 and the Strata 3. But the system in the Strata 3 seems to be an earlier version where bands run across the tongue from one side to the other, rather than the bands running down the medial and lateral side of the foot and providing some stability.

For some reason the laces are really long, I think they are longer than in any other running shoe I’ve had. But obviously that’s easy to fix by just switching out the laces if it really bothers you.

The midsole is a dual layer midsole. There is the QU!KFOAM layer and the new EVA midsole material named QU!KSPRING+. The QU!KFOAM was already part of the Spire 3, but the QU!KSPRING+ is new to the 4th edition of this shoe and is supposed to give the shoe more cushion and more responsiveness.

The outsole has remained the same compared to the previous version. The outsole is made out of blown rubber in the forefoot and carbon rubber in the heel. It does provide the right amount of traction on roads and the shoe does alright on easy trails.

The upper of the Spire 4 seems to be a bit roomier than that of the Meraki 3. The Spire 4 promised to have a roomier vamp. I like enough space in the toe box, but this is a little too much fabric. It loses its support and starts to fold over when I try to lace it tighter.

I have my regular running shoe size in both the Spire 4 and the Meraki 3 and they clearly have a different fit. They are the right length for me and the Meraki 3 also provides enough support with the more tightly knit upper and the additional padding in the tongue. The upper of the Spire 4 doesn’t feel as secure and there is definitely extra fabric. I’m not sure going down half a size would have been an option, maybe, or maybe that would have left me with too little space in the front.

Compared to the Spire 3 it is definitely a more plush feeling. Even just walking around it, it feels softer. I do find the midsole to be very comfortable. The problem is the upper. The knit is too loose and therefore the upper does not provide enough support and even starts to lose its shape on the medial side. It ruins the experience a little and although the midsole is very comfortable, because of the upper, I’m not so sure I would classify this shoe as ultimate comfort, but it’s definitely comfortable.